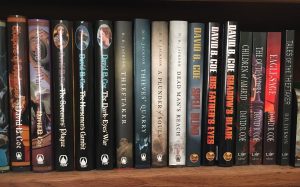 As I mentioned in last week’s Professional Wednesday post, I have a teaching gig coming up. I’ll be leading a couple of critique workshops, and this Saturday, I’ll be giving a long talk on writing epic fantasy. This opportunity came my way because someone mentioned to a mutual friend that the people running the program needed an epic fantasist, and this person thought of me.

I’m flattered, and I’m grateful for the opportunity.

The thing is, though, I don’t necessarily think of myself as an epic fantasy author.

At Boskone a couple of weeks ago, I was on a panel about historical fantasy and others forms of historical fiction. In fact, I am usually on at least one history panel at just about every convention I attend, whether in-person or virtual.

I don’t necessarily think of myself as a historical fiction author, either.

I can go through this same formulation with media tie-in work, with urban fantasy, with novels and with short stories. I can even apply it to my blog posts. Am I a political blogger? An advice and instruction blogger for aspiring writers? A social critic? A commentator on the arts?

The writers I know who are happiest tend to be those who are least easily defined by genre speciality. I have one friend — many of you know him — who has written thrillers, epic fantasy, middle grade, YA, science fiction, something approaching horror. He’s excelled at everything he’s tried, and he’s been a bestseller in more than one section of the bookstore. I have another friend — and many of you know her — who says that if writers haven’t had to re-invent themselves at least two or three times, they’re just not trying.

I have published twenty-four books. My twenty-fifth and twenty-sixth, and possibly my twenty-seventh, will be out this year. Of these, eleven are epic fantasy, nine are urban fantasy, with five — soon to be six — of the UFs also qualifying as historicals. Three more are a hybrid of epic fantasy and time travel. Two are tie-ins. And two of the books coming out this year are supernatural thrillers, a genre I’ve never tried before now. I can divide up my short fiction publications — I have somewhere between twenty-five and thirty — the same way. I’m all over the place.

And that’s just how I want it. I would get bored writing the same thing all the time. I like jumping from epic to historical to contemporary and back to epic again. The variety keeps every project fresh.

I see too many young writers trying to define themselves by subgenre. I think some do it because the industry encourages a certain level of pigeon-holing. If we enjoy some success in one area, the market responds by saying, “That’s great! Do it again, only better!”

I would encourage you all to resist that pressure. Certainly if you want to keep working for a time in the same world, with the same characters, do so. I can hardly fault anyone for that, having set eight novels in the Forelands/Southlands universe, and having turned Thieftaker into a franchise of both short fiction and novel-length works.

But I would also urge you to experiment, to try different sorts of stories, to challenge yourself to write something outside your comfort zone. Three years ago, I wouldn’t have dreamed that I’d be publishing supernatural thrillers. Five years before that, I would have told you that I had no intention of ever attempting to write a time-travel story, much less a trilogy. Seriously. That shit will make your brain explode. And yet…

And yet, the time-travel novels of my Islevale Cycle might be the best books I’ve written. The thriller coming out this spring/summer is a book of which I’m deeply proud. The sequel, which I’m writing now, is taking me in all sorts of cool directions. I’m having a blast.

And that’s sort of the point. As I said in last week’s post about my new approach to writing, I am working with the goal of enjoying my work, of taking satisfaction in what I do. This remains a very difficult profession. So write for the joy of it. Stretch, push yourself, take chances. You’ll improve your story telling. You’ll hone your prose. Most important, you’ll have fun.

So what’s next? I’m not entirely sure. But I do have this science fiction idea I’ve been toying with. And a pair of contemporary fantasies based on Celtic mythology. And a middle grade book that I’d like to get back to. And… and… and…

So, I have been sitting on this for a little while, but at this point the contracts are signed, the editorial process is well underway, and discussions of marketing have begun. Which means I can now make the official announcement.

My new supernatural thriller, RADIANTS, and its as-yet-untitled sequel, will be published by Belle Books! The books will appear under the David B. Coe byline.

I am very excited and will keep all of you informed as publication dates are firmed up, cover art is developed, and the time for teasers approaches.