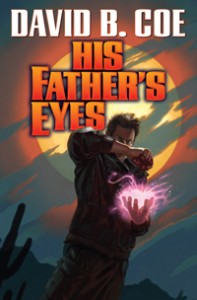 Justis Fearsson is a weremyste. He wields potent magic, but every month, on the full moon, he loses his mind. Worse, these phasings are slowly, permanently, robbing him of his sanity.

Fearsson is also a private detective, who can’t afford to take time off from his latest investigation while his grip on reality goes AWOL.

A legion of dark sorcerers has descended on Phoenix, wreaking havoc in the blistering desert heat. With the next full moon approaching, Jay has to figure out what connects a billionaire financier and a vicious drug kingpin to an attempted terrorist attack, a spate of ritual killings, and the murder of a powerful runemyste.

And he has to do it fast. Because these same dark sorcerers have nearly killed the woman he loves and have used their spells to torment Jay’s father. Now they have Jay in their crosshairs, and with his death they intend to extend their power over the entire magicking world. But Jay has other plans, and no intention of turning his city, or those he loves, over to the enemy.

Read sample chapters of HIS FATHER’S EYES, book 2 of the Case Files of Justis Fearsson.

“The enjoyable second Case Files of Justis Fearsson novel (after Spell Blind), [is] best described as homestyle urban fantasy with extra pulp. The underlying mystery is provided by a clever magical system that slowly kills the caster, powerful mages sworn not to interfere, and a blend of the supernatural with ordinary police affairs. A strong sense of the present-day Arizona setting, including prominent Latino characters, grounds the reader. Coe mixes spells and Sherlocking with snappy dialogue, tight pacing, and characters who catch and keep the reader’s attention.” — Publisher’s Weekly

HIS FATHER’S EYES is now available from Baen Books. It can be purchased from the following vendors: