I am back home, after a ten-day road trip that included a couple of successful book signing events, a Guest of Honor appearance at MarsCon 25, at least ten stock signings at bookstores in Virginia and North Carolina, and visits with some of my favorite people in the world. It was a great trip.

The only thing greater, is getting back to my wife and daughters, and settling back in to my home.

I am grateful to the folks at Fountain Bookstore in Richmond and the BooKnack in Rock Hill for hosting the signings. I had a great time hanging out with Bishop O’Connell at the Richmond signing and my wonderful friend Faith Hunter at the BooKnack. I’m also grateful to the store managers in Charlottesville and Norfolk, Cary and Durham, Raleigh and Hampton Roads, and all the other places I stopped in along the way, for carrying my books and allowing me to sign stock.  I loved being at MarsCon, and can’t thank enough the great folks who run and attend the convention.

And finally, I am so grateful to my friends who hosted me during the trip — Amy and Paul, Elizabeth and Trip, Faith and Rod.  Thank you all so much. It was so much fun to see you.

I have just turned in a revised version of the short story I submitted to TEMPORALLY OUT OF ORDER, the new anthology being edited by Joshua Palmatier and Patricia Bray. I am on “Team Patty,” which means that Patricia edited my story. And her feedback, and the subsequent revisions I did on my story, reminded me once more (as if I needed reminding) of how important a good editor is for all that we write, regardless of length.

As it happened, my story didn’t really need extensive rewriting. But it did need polishing and some subtle changes to deepen the character work and clear up the plotting. I hadn’t realized that it needed these things; it took Patricia pointing them out to me, gently, diplomatically, professionally for me to see the issues and find solutions. It helped that she was looking at it fresh — having a different set of eyes look through a story always helps, which is why having Beta readers can be so helpful. But more than that, Patricia is a fine editor who understands storytelling and can diagnose narrative problems with a simple read-through.

Of course she’s not the only person who can do this. Joshua is an excellent editor as well, and I have been fortunate enough to have worked with countless others — both on my books and my short fiction — who have improved my work and taught me valuable lessons about the craft. And that, really, is the point. We ALL need editing. I have been writing for a long, long time, and I have never written anything that was so perfect it didn’t need at least some help. A good editor is invaluable. And a good writer understands that her/his work can always — ALWAYS — be improved by editorial feedback.

Today’s installment in the continuing, unofficial Winter 2014-15 Spell Blind Blog Tour (which is way too much of a mouthful) can be found at the Magical Words blog site. The post is about plotting and pantsing — the age-old tension between wanting to outline our stories before we write them so as to keep our narratives clear and coherent, and wanting to let our narratives flow “organically” in the moment of creation. You can find the post here. I hope you enjoy it. 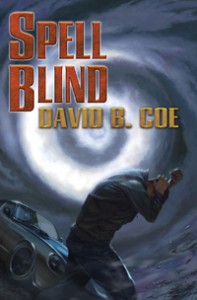 Yesterday I received one of those emails that authors usually hate to get. A reader wrote to let me know that there were a couple of details in my new novel, Spell Blind (book I in The Case Files of Justis Fearsson) that I had wrong. I work hard on my research, and on those occasions when I happen to get something wrong, I am deeply disappointed in myself. And I have received messages in the past from readers who, let us say, did not handle the situation in a socially appropriate way, which makes the whole thing that much worse.

This time, though, the reader in question, did everything right. His email was courteous, informative, and respectful. It was clear to me that he wrote not to criticize, but rather to help. He was even kind enough to tell me that the small inaccuracies he found did not keep him from enjoying the novel. And armed with what he told me, I will be sure to avoid these errors in subsequent volumes of the series. I’m grateful to him for his help, and for his willingness to take the time to contact me.

I’m sharing this with you because I think we can all learn from this gentleman’s professional and thoughtful approach to contacting me. Just about every author has faced this at one time or another. We’re human, and sometimes we get things wrong. But I’ve been sent emails about mistakes I’ve made that were rude to the point of abusiveness. In fact, I’ve received emails “correcting” things that I DIDN’T get wrong, that were rude. There is nothing wrong with sharing our knowledge in circumstances such as these. As I said, his email helped me. But there is no need for cruelty, for abuse, for name-calling. Not to be too glib, but it’s one thing to be helpful, it’s another to be hurtful.

And what were my mistakes, and why would I share them here? Well, I’m always willing to share my good news — nice reviews, new sales, etc. This time, I messed up, as all writers do from time to time, and I feel that I should share that, too.

Early in the book, Justis Fearsson, my point of view character, mentions that he is licensed to own a firearm in Arizona. Arizona doesn’t issue such licenses. I also said that Jay became a detective in the robbery detail of the Phoenix Police Department upon graduating from the police academy. As it turns out, the PPD requires two years of uniformed duty before an officer can be assigned such a unit.

These are small matters that have little bearing on the plotting or character arcs.  But that doesn’t excuse my mistakes. I got these things wrong, and I apologize for that.

I’m exhausted after a great weekend at MarsCon. Tomorrow I leave Williamsburg to do a few stock signings in North Carolina and then two bookstore events later in the week: a signing at the Books-A-Million in Gastonia, North Carolina on Tuesday (4-6) and then a signing at the BooKnack in Rock Hill, South Carolina with Faith Hunter on Wednesday (5:30-8:00). I’ll be signing copies of Spell Blind, the first book in my new series from Baen, The Case Files of Justis Fearsson, and also copies of my Thieftaker books (Thieftaker, Thieves’ Quarry, and A Plunder of Souls) which I write as D.B. Jackson.  Hope to see many of you along the way.

Panels on the best genre books of the past quarter century and overcoming writing blocks in our novels, readings and signings with the wonderful Alethea Kontis, David Weber, and Katherine Kurtz, countless conversations both serious and fun: Just another day at MarsCon 25.  Still more to come this evening, including the masquerade and the charity auction, and right now I’m trying to grab a bit of down time. But it’s been a terrific convention so far.

One of my favorite things to do at any convention is take advantage of my down time by exploring the area in which the con is held. While in San Jose for a World Fantasy Convention several years ago I took an epic hike through one of the open space preserves in the foothills above the South Bay. When I was at EerieCon last year, Amy Lass Kauderer was kind enough to take me to a lovely natural area near the convention, and Kim Greyson has twice done the same for me during my previous visits to Calgary. (Kim be ready: I’m coming back in 2015!)

Well today, after a fun breakfast with the MarsCon staff, I drove out to the Colonial National Parkway, a gorgeous road that follows the course of the York River for a stretch. I did some birdwatching along the way, seeing eagles, ducks, loons, cormorants, and grebes, had a terrific lunch of clam chowder and fried oysters at the Yorktown Pub, walked around the Yorktown waterfront for a bit, and then headed back to the hotel. I have plenty to do the rest of the weekend, and I know that the folks here at MarsCon will take good care of me. But for a few hours this morning, I got away from work and experienced a small part of what makes this part of Virginia such a special place.

I have arrived in Williamsburg, Virginia for MarsCon 25, which begins tomorrow. I was literary Guest of Honor at MarsCon back in 2013, or maybe it was 2012. Whichever it was, I had a great time here, and when the folks who run the convention decided to invite back some of their former GoHs for this silver anniversary con, I was delighted to accept. Some of my favorite people will be here this weekend, and I’m looking forward to catching up with them, as well as meeting some new folks.

I spent the day driving from Richmond to the Virginia Beach-Hampton Roads-Newport News-Norfolk area, where I stopped in at several bookstores to sign stock. This after a wonderful signing last night with Bishop O’Connell at the fabulous Fountain Bookstore in downtown Richmond. The stock signings I did today went well — every store I visited had multiple copies of Spell Blind as well as copies of my Thieftaker books. And all the staff workers I met were friendly and professional.

The drive east from Richmond was beautiful. This entire area was hit by an ice storm yesterday, and this morning, with the sun struggling to break through a blanket of high clouds, the trees lining the highway were still glazed, so that their branches seemed to glow in the silver light. Gorgeous. Later, nearer to the ocean, I saw a Bald Eagle circling over the road, and then a Peregrine Falcon diving for pigeons just outside of Norfolk.

A good day, and, I’m sure, the prelude to a great weekend.

Today on the unofficial Winter 2014-15 Spell Blind Blog Tour I have a very special post up at the website of Lucienne Diver, writer, agent, friend. The post is an interview with Namid’skemu, a character from Spell Blind and the other volumes of The Case Files of Justis Fearsson.

Namid, as he is known, is a runemyste, the spirit of a Zuni shaman and weremyste who was sacrificed centuries ago by the runeclave and imbued after his death with enormous magical powers. He is now a guardian of magic in our world and he is Justis “Jay” Fearsson’s mentor in all matters relating to spellcraft.

He is not the most effusive of beings and getting him to sit down for an interview was not easy at all. So I hope you enjoy this. You can find the interview here.

Today, I am back at Magical Words with a post about character and character relationships in Spell Blind, the first book in The Case Files of Justis Fearsson. The post is part of my continuing unofficial Spell Blind Winter 2014-15 Blog Tour. You can find the post here. I hope you enjoy it.