Back in September 2020, as we lurched toward the Presidential election, I wrote a piece for this blog on the peaceful transfer of power. In it, I warned of the dangerous path followed by the former inhabitant of the White House, who was already sowing doubts about the integrity of the vote and laying the groundwork for his unsuccessful coup attempt in January 2021.

My warnings were well-founded, of course, but I fear I was terribly naïve about how to combat the threat our former president posed. When I wrote the piece, I believed that once he was defeated and removed from office, his pernicious influence on American politics would fade. I was wrong.

Tomorrow is Election Day, and as of this date, a staggering number of Republican candidates at all levels of government have, like the former guy in 2020 (and 2016), refused to promise that they will honor the voting results in their races. To draw upon a turn of phrase used by President Biden in a speech last week, they have decided that they only love this country and its founding principles when they win.

If you will allow me to slip on my historian’s cap for a moment . . . . The most important date in the history of our republic is not July 4, 1776 or October 19, 1781 (the effective end of the War for Independence) or March 9, 1779 (the date on which our new nation started operating under the authority of the Constitution). To my mind, the most important date in our history is March 4, 1801. That was the day on which President John Adams relinquished power to his political rival, Thomas Jefferson, who had defeated him in the election of 1800.

Here is what I wrote in 2020 about that moment in our history:

This acquiescence to the people’s will, this statement of belief in the greater good, turned the ideal of a democratic republic into reality.

It was bad enough that a defeated President, driven by ego and pique and an insatiable appetite for affirmation and power, should imperil this foundational imperative of our system of government. But it is truly chilling to see one of our two major parties mimicking his behavior, adopting his model of petulance and self-interest as an across-the-board election strategy. Make no mistake: The future of our nation is under threat.

Our republic has endured for as long as it has because, with very few exceptions (Rutherford B. Hayes, Richard Nixon, and now Donald Trump), our leaders on both sides of the aisle have chosen to abide by the rules as laid out in the Constitution. Yes, politicians cheat. They wage dirty campaigns. They look for every advantage. This has been true for as long as our nation has existed. In the end, though, they have accepted voters as the final arbiters of their electoral fates. As soon as candidates refuse to do this, they expose the fragility and brittleness of our system. If enough politicians on either end of the political spectrum decide the only legitimate outcome of a race is their own victory, the entire system will collapse. Outcomes matter, of course. But the integrity of the process itself is what preserves democratic institutions. Take away that integrity, leave election outcomes to be determined by who can scream “fraud” loudest and longest, and we are doomed.

This is the future today’s GOP is embracing. They have chosen to place themselves and their party over the will of the people, and if they are rewarded for doing so, the American Experiment is over.

Let me be clear: When elections are close, there are going to be recounts. That is part of the process as well. No one disputes that. (It is worth remembering that in 2020 the Trump Campaign demanded and was granted multiple recounts in Georgia, Arizona, Michigan, Pennsylvania, and Wisconsin. And while a handful of votes shifted one way or another, not one of these recounts altered the final result.) One can demand a recount and then honor the decision of voters once the process is complete

What we are seeing this year is not the expression of legitimate concerns about close election results. The elections haven’t been held yet. Rather, this is a systematic attempt to sow doubts about the elections ahead of time and thus justify whatever shenanigans they intend to try next. It’s disgusting. It’s immoral and corrupt and corrosive.

There are other issues on voters’ minds this year, obviously. I would argue that the preservation of our republic outweighs all of them. Vote like democracy itself is at stake. Because it is.

Today’s Photo Friday images come from Election Day. Here in our little town, our orderly, socially-distanced voting line stretched out the entrance of our elementary school, through the parking lot, and down the sidewalk. It took me 45 minutes to vote. For Nancy, a bit later in the day, it was an hour. That may not sound like much to many of you, but in a town of about 3,000 people it is WAY more than I’ve ever had to wait in any other election. (I’ve been voting here since 1992.)

This reflects a national trend. In absolute numbers, more people voted this year than ever before. As a percentage of voting population, this campaign might have seen the highest level of voter participation in more than a century. And this is good for everyone. It’s good for our republic.

Look, we don’t yet have a declared winner in the Presidential race, though things are certainly trending in one direction. But can’t we agree that when more people participate, our nation is healthier? And can’t we also agree that if people took the time to vote, by any legal means, whether in-person or absentee/mail-in, they deserve to have their votes counted? This seems pretty basic to me.

Have a great weekend, folks. Keep the faith. It’s going to be okay. 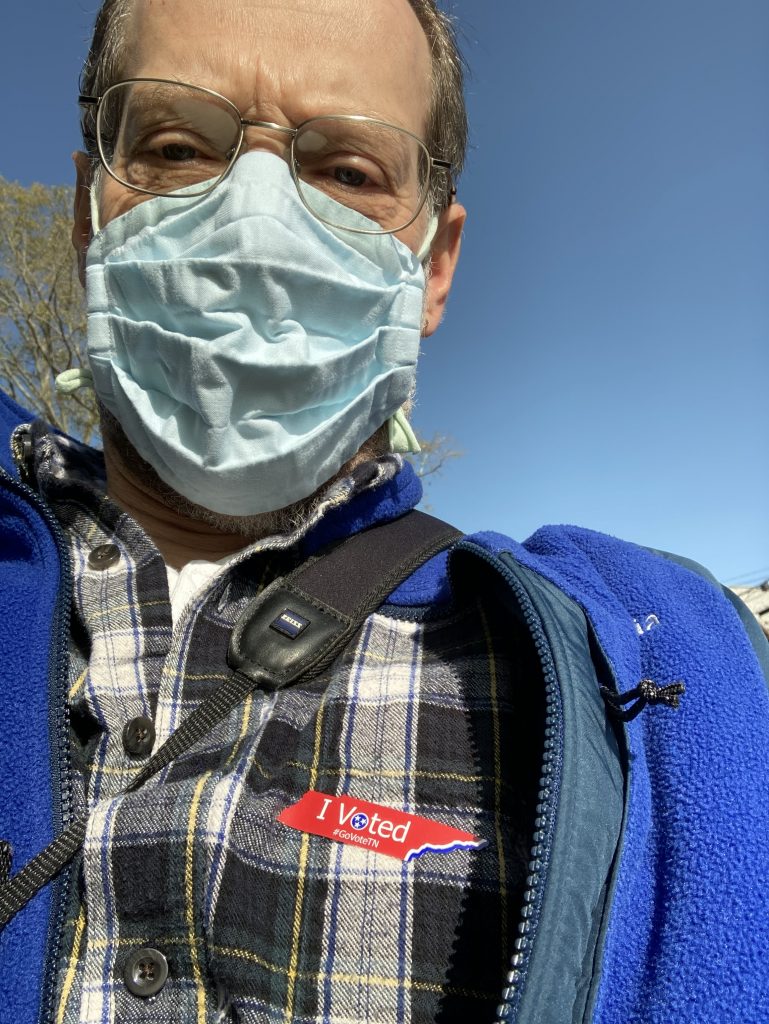 [11/4 Edit:I went to bed last night thinking all was doom and gloom. This morning I see rays of hope. This isn’t over, and counting votes doesn’t happen according to ANYONE’S timetable. Hang in there folks. We are living in Interesting Times.]

I am writing this, as I do most of my Writing-Tip Wednesday posts, ahead of time, a couple of days before election day. Naturally, I have no idea what the world will look like Wednesday morning. I am at times deeply afraid; at other times I’m hopeful, even confident.

Whatever happens, though, I know that I will soon need to get back into my work rhythm. For so long, I have been too distracted to concentrate on my writing. I have forgiven myself for lost days and low word counts and procrastination. I haven’t even started to read through the submissions for Derelict, the anthology from Zombies Need Brains that I am co-editing with Joshua Palmatier. The deadline is still more than eight weeks away, but already the submissions are piling up. It’s time for me to start reading through them.

I have a novel to finish, and projects that need shepherding toward release. I have stuff to do, and I am sick to death of being trapped in my own head, debilitated by my anxiety, obsessed with things I can’t control.

More, I remain uncertain as to how I will deal with these tasks and projects going forward. That comes, I suppose, from still being in the dark about how events will unfold.

But I know that one way or another, I have work to do. If the worst happens on Tuesday, I will still wake up Wednesday a writer and editor with stuff to get done. As I said in Monday’s post, this week will be one of brief, inadequate posts. A week from now, I hope to be able to tell you much more about where I am and what I’m doing to close out this year.

Until then, if you can, keep writing.

Honestly, I have nothing to offer today. I have been on edge about tomorrow’s election for too long. I have had trouble sleeping, my stomach has been in knots, I’ve struggled to concentrate on my work. I haven’t liked myself very much over this period. I have wished again and again that I might find some way to overcome my anxieties and just accept that whatever will happen will happen. I haven’t been able to, and I doubt very much that I’m going to find the secret to inner peace in the next thirty-six hours. So, for this week, please accept my apologies for a set of short and grossly inadequate blog posts. I hope to be back to my normal output next week.

For today, I urge you to vote. If you’ve voted already, please urge your friends and loved ones to vote, or help someone you know get to the polls.

This will all be over soon, one way or another. As far as I’m concerned, it can’t happen soon enough.