Today, I am delighted to welcome to the blog my dear friend, E.C. Ambrose (a.k.a. Elaine Isaak). Elaine and I have known each other for a long time, and she is one of the truly good people in this business. She is incredibly smart, funny, and deeply passionate about writing and our genre.

Her newest book, DRAKEMASTER, comes out from Guard Bridge Books on April 14!

Two Books with One Stone 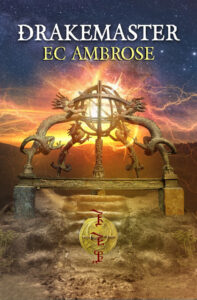 One of the great delights of writing historical fiction is the opportunity to leap into research and go bouncing off into every conceivable rabbit hole—er, to do a deep dive into a specific time, place or topic which will provide the backdrop for the story you have in mind. Unless you’re already a historical specialist in that area, doing the research is likely to consume a lot of time, attention, and other resources.

My approach to developing a novel idea tends to be pretty methodical. Sometimes, I trip across an engaging fact or historical moment that I want to explore and I’m able to use that as an immediate jumping off point for the more detailed research. Other times, I have a general enthusiasm for a topic that could be mined for fictional potential. Mostly what I’m looking for is moments of cultural instability, ideally with multiple cultures interacting, and rich layers of conflict that can propel a plot as well as inform character.

The genesis of DRAKEMASTER, my new historical fantasy novel, arose from my fascination with Mongolian history and culture, alongside an interest in early clockworks. The first gave me a general region I wanted to explore, but it was the second that allowed me to pinpoint exactly where and when the book would be set. Central Asia is a region both vast in scale, and deep in scope, so it would be easy to get lost in all of those aforementioned rabbit holes.

When I came across a reference in one of my early technology books to “the vermillion pens of the ladies’ secretarial” I had found my particular niche. The footnote refers to the court recorders of Song Dynasty China writing down very detailed horoscopes for imperial children, in order to determine who was most fit to succeed the emperor.

These horoscopes depended on a highly accurate astronomical clock built in Kaifeng around 1090 CE by the polymath known to us as Su Song. Kaifeng, the capital of the Northern Song Dynasty, fell to the Mongols during their southward sweep, but rebelled against the Khan in 1257. Conflicts aplenty! I had my very specific place and time to write into.

By this point in my research process, I had amassed quite a heap of books and references. It seemed sad to use all of that information to craft only the single book, even if it might grow into a series. What to do? The answer was to spin out the same body of research into a completely different book, one that would aim at a different market rather than compete with the fantasy novel.

In addition to my love of fantasy and science fiction, I also adore a good adventure novel, the kind that solves a puzzle which may span centuries and a thousand miles to uncover something extraordinary. I took what I had learned about Mongolian history, and in particular, the landscape-oriented tradition of Khoomei throat singing, and used it to envision a musical map created a long time ago, which would lead a contemporary team on a thrilling chase to locate a great prize, one of the greatest tombs never found: that of Genghis Khan. This project became The Mongol’s Coffin, the first of my Bone Guard archaeological adventure novels.

What’s the takeaway for the would-be historically inspired writer?

First, diligent pursuit of the specific. Rather than be overwhelmed by the sweep of history, or consumed by the “great men” who tend to dominate, look for the telling detail that might serve as the jumping off point for a different view.

Second, find an organizational system that works for you. You’ll need to return to this well throughout the project(s) so marking pages, keeping a bibliography, and making detailed notes about the stuff that most excites you will give you a good start. I am a spreadsheet fan, so I make a timeline for the period of the book and fill in all I can find, then have additional worksheets to cover specific topics.

Third, let your pre-writing brain go wild with the nuggets you discover. Extrapolate what they imply about conflict and character. For a fantasy, look for the gaps that might suggest magic or other fantastical elements. Don’t stop when you have one compelling idea for a book—see if there might be another book or two lurking just behind.

And above all, happy writing!

E. C. Ambrose writes adventure novels inspired by research subjects like medieval surgery, ancient clockworks, and Byzantine mechanical wonders.  Published works include DRAKEMASTER (2022), the Dark Apostle Series, and the Bone Guard archaeological thrillers. Her next adventure will be an interactive superhero novel, Skystrike: Wings of Justice, for Choice of Games.

Learn more about the work of E. C. Ambrose on the author’s website