been caught up in the spirit of gift-giving. We want to find those perfect presents for the people we love most. We want to surprise and delight. For Nancy and me, shopping for our daughters, who are grown and very much aware of the things they want and need, has become fairly easy, if unexciting. They give us lists, we do our best to find the things on those lists, and everyone is happy.

A few years ago, we surprised them with special presents we’d spent a good deal of time planning and acquiring, and we still try to do that when we can, but our lives are busy, and these days the holidays really are much more about being together than about stuff. Which is as it should be.

But I wanted to share with you two brief stories about the two most thoughtful, memorable, wonderful gifts I have ever received. Because I think of them often this time of year.

When I was very young — about seven years old — my brother Jim, who is six years older than I am, developed an interest in birding. How that came about is his story to tell, but the important point is that his love of birds soon infected our older brother, Bill, and me. We began to go on bird walks together whenever possible. Jim and I were both living at home still, and during spring migration we would get up early in the morning, even on school days, to check out the warblers, orioles, tanagers, vireos, thrushes, and grosbeaks moving through our neighborhood. Bill, fifteen years my senior, nine years Jim’s senior, joined us whenever he came home to visit, or whenever we went to visit him.

Again, I was seven, Jim was thirteen, Bill was twenty-two. We ought to have had little in common. But birds and birdwatching shaped and cemented our love. Other shared interests and passions contributed as well, but our love of birds, of nature in the broader sense, was formative.

As birders, Jim and I started getting serious about keeping track of what we saw and when, and about a year later, on Christmas day 1971, Jim surprised me with what was, to my mind, an amazing gift. [Geek warning: What a young birder thinks is an amazing gift may not match what you think is an amazing gift . . . .] It was a binder with custom made bird checklists for my year lists, my life lists, my lists for our little town. He had typed up the life lists, created a “template” for the year lists (back when that meant using a typewriter and a ruler and a marker) and actually filled out my life list up to that point based on his own memories of our earliest excursions, which were clearer than mine.

The amount of work involved, the effort, the attention to detail, the amazing thoughtfulness of the present, from someone who was fourteen at the time, for his annoying little brother — it all still boggles my mind.

I still have that binder. I don’t use it for much anymore, but I will NEVER throw it away.

The other thing that bound Jim, Bill, and me together was music. They introduced me to so much of the music I still listen to today. Jim was my gateway to jazz. Bill, though, was my gateway to rock, and to blues, and to bluegrass. He was my guru. As I said, he was fifteen years older, and as I entered my teen years, and was diving into music in a serious way, as both a listener and a budding musician, he was the person to whom I looked for guidance. He was an incredible musician in his own right, he was in a very cool band, and he was a student of music, particularly classic rock.

Sometime in my late teens, I can’t remember the exact year, he gave me two gifts for Christmas. The first, I could tell right away, was a record. An LP, because back then that was pretty much all we had. The second gift I couldn’t figure out. It felt and looked like a thin sheaf of papers.

“Open the album first,” he told me. 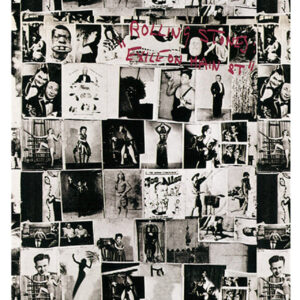 I did. Exile on Main Street, by the Rolling Stones. A legendary double-album by the rock band of the era. “I think you’re ready for this,” he said.

I could stop this story right there. My older brother, my rock ‘n roll mentor, he of the effortless cool, telling me I was ready for what I knew was his favorite album of all time? That was gift enough. But then he told me to open the other package.

Exile on Main Street didn’t come with a lyric sheet. The Stones couldn’t be bothered with such trifles. And so Bill had transcribed the lyrics to every song on the album. This was before the internet, before personal computers. He listened to the two records over and over again — he later told me he had to replace his copy of the album, because he wore the grooves down so much — trying to decipher the mumblings and rantings of Mick Jagger and Keith Richards, men not known for their clarity of speech. And he typed them up for me. I still have the album, of course. I am ashamed to say, I don’t know where those lyric sheets have gone.

Two sparkling, wonderful gifts, from my two brothers. Both shine in my memory to this day. They were born of love and thoughtfulness and a type of generosity that can’t be measured in dollars and cents.

Something to think about as we approach the holidays.

Have a wonderful week.