I was seven years old, the youngest child by far in a household that revered baseball. I didn’t remember the exact date, but today we live in an age of marvels, and all I had to do was Google a few key phrases from the storyline of the game. August 30, 1970. That was the day I fell in love with baseball.

We were a family divided. My sister, Liz, and my brother Jim, the siblings closest to me in years, both rooted for the Yankees. Liz was — and remains — a fanatic. Jim cared less than the rest of us, but in our household, at that time, one chose a team. My oldest brother, Bill, had been a New York Giants fan until their relocation to San Francisco. He idolized Willie Mays all his life. He attended college in Boston, remained there after graduating, and — to this day, I struggle to speak the words — became a Red Sox fan. In the battle of New York teams, though, he and my father rooted for the Mets. Bill hated the Yankees the way my father hated Richard Nixon. Only my mother remained above the fray. I believe she refused to root for one particular team because she didn’t want to appear to favor one child over another.

Liz and Jim convinced me that I liked the Yankees. Jim lived at home; Liz was in college, but came home with some frequency. I attribute their victory on the battleground of team loyalties to proximity and, in Liz’s case, her single-minded determination that I. Would. Be. A. Yankees. Fan.

In that summer of 1970 I was still learning the game. I have no memory of having watched baseball before then, though no doubt I did. My baseball consciousness dates from that summer, from that day. August 30th.

Because on that day Mickey Mantle, our household’s Most Beloved Yankee, made his debut as a Yankee coach. He’d retired the year before, after a Hall of Fame career foreshortened by knee injuries and, the world later learned, excessive drinking. Mantle’s return to Yankee Stadium, and in particular his appearance in the first base coach’s box in the fourth inning, was a big deal in New York. So much so, that I resolved to watch the game. We had a color TV at that point, but it was downstairs in the family den, and clearly my father and mother were watching something else on the good set.

I was exiled to my parents’ room, home of our old black and white television. The game was on WPIX, channel 11, the Yankees’ local affiliate. It was sponsored, like all Yankee games at that time, by Schaefer Beer — “The one beer to have when you’re having more than one.” Yes, that was really the slogan. Quite a distance from “Please drink responsibly.” 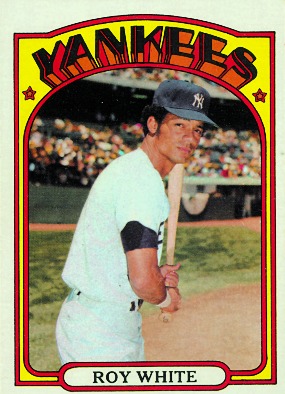 The Yankees were playing the Minnesota Twins, a powerful team lead by perennial all-star Tony Oliva and future Hall of Fame slugger Harmon Killebrew. The Twins jumped out to an early lead, gave a run back, but still led 2-1 in the fifth inning, the second inning of Mantle’s stint as coach. The Yankees managed to load the bases and, with two outs, their left fielder, a guy named Roy White, stepped to the plate.

At this point, I was riveted to the game. I was in the process of realizing that I really, really liked baseball. I enjoyed following the broadcast on my own, without anyone else trying to explain stuff to me. But, of course, I was desperate for the Yankees to tie things up or take the lead. It didn’t seem right that Mickey Mantle should lose his first game as coach.

The Twins pitcher was a nineteen-year-old rookie named Bert Blyleven. I later learned that he was from the Netherlands, like both my grandparents on my father’s side. For much of his stellar career, he was the only Dutch player in the Major Leagues. He won a lot of games and struck out a lot of players with a strong fastball and a wicked curve. He, too, was eventually inducted into the Hall of Fame. In 1970, I knew none of this, and wouldn’t have cared. We needed runs!

Roy White hit Blyleven’s first pitch to what was known in New York as Death Valley, the vast expanse of Yankee Stadium’s left field. Oliva, a fine defensive player, drifted back to the wall, but could only watch as White’s fly cleared the fence for a grand slam home run. Yankees 5-2. I am certain that I cheered and jumped up and down, no doubt earning a rebuke from my father downstairs.

That proved to be the final score. Mickey had his first coaching win. And I had a new favorite player. From that time until his retirement in 1979, Roy White was my hero. He wasn’t as well-known as some other Yankees, but he was quietly consistent. He got his share of hits, drew a lot of walks, hit the occasional long ball, played a solid if unspectacular left field, and always comported himself with class and dignity.

My memories of that day fifty years ago are remarkably clear, but the game as I was getting to know it then feels a long way removed from where we are now.

With baseball’s return this past weekend, to empty stadiums with pre-recorded cheers and, in some cases, cardboard cut-out fans, I feel especially nostalgic for the baseball of my youth. I still love the game, though I find my affection for it tested by too many strikeouts and an over-reliance on the home run, by unbearable delays in play and rule changes that rankle, by steroids and cheating scandals, by labor disputes between millionaire players who are barely older than my children and billionaire owners who seem to care only about their bottom lines.

I haven’t stopped rooting for the Yankees, although I will admit to a brief flirtation with the Mets in the mid-80s, when their young, dynamic stars were New York’s darlings. I tend to attach to players as much as to teams. Roy White. Dwight Gooden and Daryl Strawberry. Derek Jeter. Now Aaron Judge. But it is the game itself that I love. Yes, I complain about the pace of play, but part of what draws me to baseball is the absence of a clock. Time is meted out in pitches and outs and innings — the perfect units with which to mark the passage of a languid summer afternoon or evening. And there is nothing in sports that I enjoy more than the baseball playoffs and World Series. I watch every game and lament the end of the postseason the way I once lamented the end of summer vacation.

That said, I can’t get as excited about the game as I used to, for all the reasons I mentioned before, and for a host of reasons that have everything to do with me and nothing to do with the game. Perhaps it’s inevitable that middle age should lessen our passion for such things. Family, friends, work, a world in need of salvation and healing — these are the concerns that consume me today. And yet, on some level, I remain that seven-year-old kid waiting for the clutch hit or the crucial strikeout. I miss the days when my greatest worries were about the Yankees’ upcoming series against the Sox and the possibility that this year’s Roy White wouldn’t be in the pack of baseball cards I’d just bought.

I wish you all a wonderful week.