Each of us responds in his or her own way to stress and uncertainty and fear – and there is plenty of all three to go around right now. I have one friend who has been unbelievably productive during the past six weeks. And yes, I hate her just a little bit.

I believe strongly in setting professional goals for myself. Sometimes that means work goals – “I want to write book X by June 30th and book Y by September 30th, and then I want to write three short stories in October and November…” Sometimes it means what we might call achievement goals – “I want to see this book in print by the end of summer, and this book sold to a publisher by the same time, and this short story placed by the end of the year…”

I find that work goals keep me focused and productive. They are a tool I use to self-motivate. Once I write something down in my work calendar – “Work on new fantasy from January to April” – the end of April becomes, in my mind, a deadline. I treat it as such, even though in a technical sense no one may be waiting for the book at the end of that period.

Professional goals, obviously, are more fungible. They have to be, because we have limited control over the marketplace and our relationship with it. Even those who self-publish can’t fit every circumstance to their needs and desires. But still, having those sorts of goals can help with focus, with productivity, and also with that tendency many of us have to overwork our books and stories and thus delay sending them out. (See last week’s Writing-tip.)

As I have already written in this Wednesday feature, the pandemic, and the economic collapse that has come with it, are bad news for the publishing industry in general and new writers in particular. This is a scary time to be pursuing a career in any of the arts, writing included. This is, in my opinion, not a good time for strict adherence to achievement goals.

Work goals, on the other hand, might just be the secret to making the most of this time of social-distancing and Stay-At-Home orders. Each of us responds in his or her own way to stress and uncertainty and fear – and there is plenty of all three to go around right now. I have one friend who has been unbelievably productive during the past six weeks. And yes, I hate her just a little bit. I have another friend who has been unable to do any creative work at all. I probably fall somewhere in between – I’m too distracted to be as productive as usual, but I’m managing to get work done. I recently completed a 30,000-plus word novella, and I’m already nearly halfway through a second. Given how distracted I’ve been, I’m pleased.

My productivity has actually gone up in recent weeks, and I believe that’s because I have finally adjusted to this new reality, and so I’m no longer beating myself up for not writing as quickly as I usually do. I had considered revising my work goals for the year; instead, I abandoned them entirely in favor of work goals for the next couple of months. We are in uncharted territory at this point. No one really knows what the world is going to look like two weeks from now, much less two months, or six. And so for now my goals are to finish this second novella and then write the third. When that’s done, I’ll edit them and figure out what to do with the trilogy. And after that… Who knows? I’ll make those plans when the time comes.

At the same time, though, I am not ready to give up on goals altogether. True, I don’t quite know how I will market the novellas when they’re ready for distribution, but I still want to get them done, and I still want to feel productive. The truth is, I’m happier when I’m working. I feel better about myself and my career, and I genuinely enjoy creating. I seek a balance: I want to have goals that force me to work, that maybe push me to keep writing, even if not at my usual pace. At the same time, I have to be cognizant of the simple fact that I’m not at my best right now. This is a global crisis – medical, economic, political, social. It’s a frightening world we’re living in, and that has to take a toll.

If you’re one of those people who can work through this at your normal pace or even faster than usual, good for you. I hate you a little bit, too. For the rest of you who feel as I do – that you want to remain productive, but can’t quite work at your usual speed – find that balance I’m talking about. Maybe you usually write 1500 words a day, but currently feel you’re only at 75%. That’s 1100 words a day. That is still a decent pace. That will give you a novella in a month or so, a novel in three months. You’ll feel like you’re accomplishing something while also being realistic about our current situation.

The point is not to write quickly – the goal ought never to be solely about that. Now especially, the goal should be to find a pace and level of achievement that maintains both our standards for the work we produce and a feeling of professional and emotional health.

We really can’t ask for more than that.

Those who know me well, know that I am an avid birdwatcher. My older brothers got me started when I was just a kid. And when I say just a kid, I mean that – I started birding when I was seven. For Christmas just before my ninth birthday, my brother Jim created a whole set of life lists and year list templates (before templates were really a thing) and bound them in a notebook. Totally geeky, right? To this day, it remains one of the best presents anyone has ever given me.

I bring all of this up because we are now in the middle of spring migration, when the forests of North America become a byway for returning songbirds heading north to their breeding grounds. Yes, there are migrations for other types of birds as well – certain species of hawks return to our area in the spring, as do shorebirds. But for those birds fall migration is the more significant event. Spring migration is all about birds from the neotropics.

Warblers, tanagers, orioles, certain grosbeaks (Rose-breasted and Blue), flycatchers, thrushes vireos. These are among the most colorful and beautiful birds we see in the States. Brilliant yellows and oranges, deep reds, stunning blues. Many of the birds have gorgeous songs – the thrushes in particular. Most of the migrants are very small; the warblers tend to be only four or five inches from beak to tail. And many of them hang out at the very top of the forest canopy, making them very difficult to spot, much less identify, and leading to an avocational malady known as “warbler neck,” which is pretty much self-explanatory.

For serious birders, spring migration is New Year’s, Mardi Gras, and the Fourth of July all rolled into one. I know that it is my favorite time of the year and I am pleased to say that despite the pandemic, it is something I have been able to enjoy fully this spring. Every morning I walk a few miles on a rails-to-trails path near my home. I get a bit of exercise, and I see my favorite birds. Just about every day I am reminded of a birding experience from my childhood, of a moment with my brothers or an early sighting while alone that convinced me I could identify species on my own. For me, spring migration is about more than seeing the birds. It is about reconnecting with nature, and also with a passion that has remained with me for literally half a century. It is about memory and family. It both calms and invigorates me. A single good sighting on my morning walk can buoy my mood for the entire day.

As a kid, I was self-conscious about my interest in birds. A few of my closest friends knew, but otherwise I kept it to myself, fearing that I would be teased. I was already a nerd. I was short. I wasn’t the best athlete. I was usually in the school play. So already I had a lot of geek cred. The birdwatching, I feared, would be one nerd-attribute too many. Looking back on this, I regret how shy I was in this regard. It has always been so important to me. And yet, even to this day, I feel a twinge of embarrassment when I’m out with binoculars in hand, searching the foliage for a warbler or wren, and someone I know happens past. Old habits die hard.

On the other hand, I once had someone ask me for an interview what my superpower was. And the truth is, my superpower is that I can identify by song almost any bird native to my area. I’m sitting outside as I write this, and just in the moment I pause in my typing I can hear a Red-eyed Vireo, a Blue-gray Gnatcatcher, a Carolina Chickadee, a Tufted Titmouse, a Summer Tanager, a House Finch, and a Nashville Warbler. Yeah, I know – as superpowers go, it’s not much. But really it’s all I’ve got.

In any case, I wasn’t sure what to write about today, and given how much of a balm birding has been for me these past few weeks, I thought I would share this.

For those who are interested, birding is an easy hobby to pick up and a rewarding one to pursue. All you need is a pair of binoculars, a good field guide, and a willingness to learn.

Wishing you all a wonderful week.

For this week’s Photo Friday post, I offer something a bit different. The original concept for the image is not original, of course. I’ve seen others do what I did: namely composing a photo entirely with water reflections to get a somewhat abstract blend of color and shape and form. I took this one a week or two ago, when leaves were first appearing on trees near the lake. I captured several images – this is the one that I liked best, though if you asked me to tell you why, I probably couldn’t.

I hope you like the image, and I hope you have safe, fun, peaceful weekend. 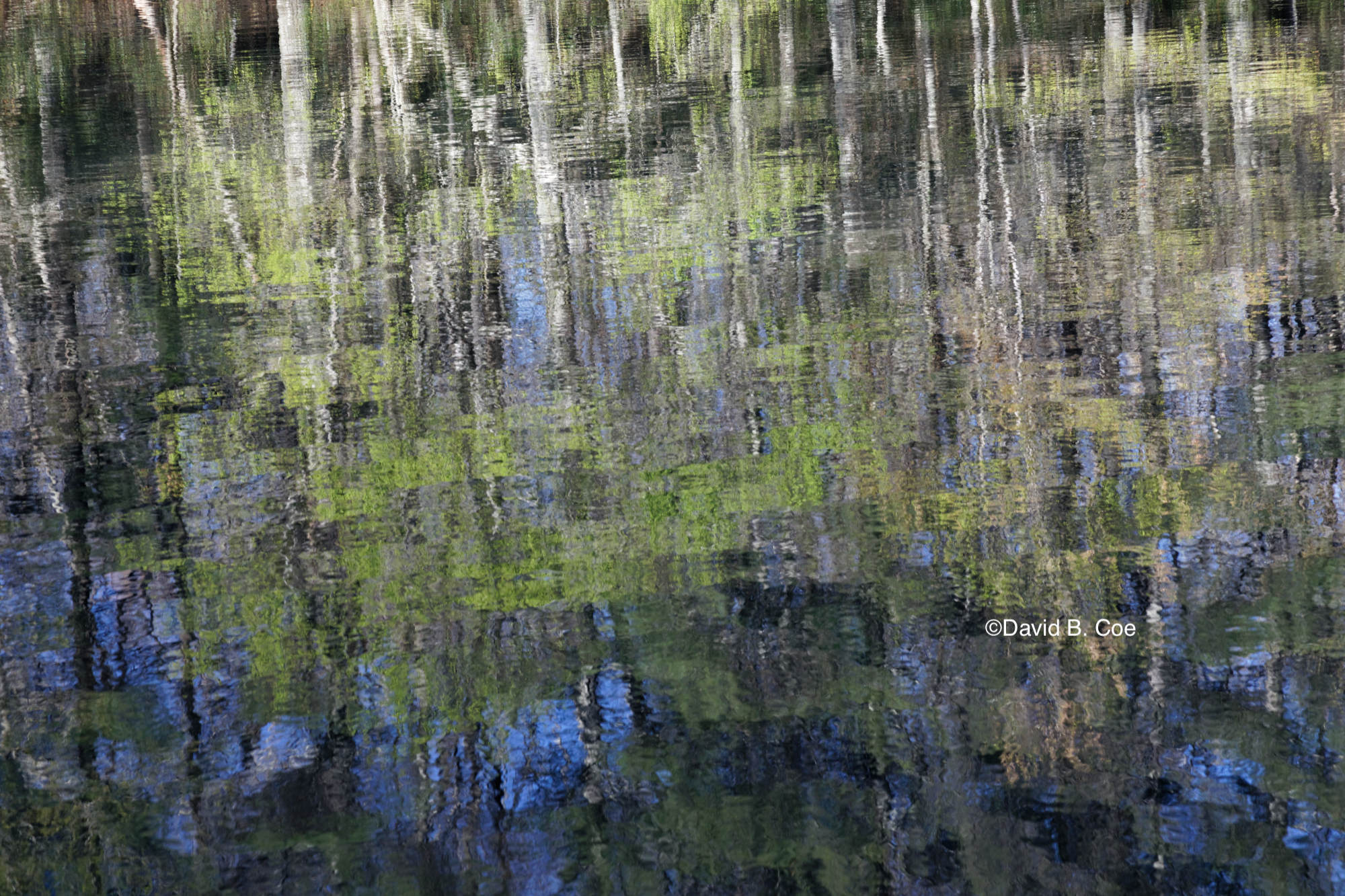