It is more people than can fit into the stands of Fenway Park. Or Wrigley Field.

It is actually higher than the capacity seating of 28 of Major League Baseball’s 30 stadiums (the exceptions: Yankee Stadium and Dodger Stadium)

It is more people than die in car wrecks in the United States each year.

It is higher than the number of annual Breast Cancer deaths in the U.S.

It is more than the median annual income for a full-time wage earner working forty hours per week.

It is more points by far than any professional basketball player has scored in an entire career.

It is three times the total population of Colonial Boston in 1770.

It is nearly twice the combined number of species of mammals, birds, and reptiles in the entire world.

It is far more than the number of species of fish in all the bodies of water in all the world.

It is more than three times the number of years humans have inhabited North America.

It is about as long ago as the Upper Paleolithic Age (read: Late Stone Age) began.

It is exactly the number of words people shoot for during National Novel Writing Month (NaNoWriMo).

It is more than Donald Trump’s vote margin in Pennsylvania in 2016, and more than his combined vote margins in Wisconsin and Michigan.

It is more Tweets than Donald Trump has dumped into the world since declaring his candidacy for the White House in June 2015.

It is, if you haven’t yet heard, the number of Covid-19 deaths in the United States as of this past Friday.

Given under-reporting and overly optimistic “back to work” orders, it is, quite likely, less than half what our nation’s total will be for this first wave.

Sorry to start the week on such a down note. But that’s where my thoughts have taken me.

Wishing all of you strength, courage, and good health.

So, you’re tele-working now. Or you’re home with kids whose schools have closed. Or, like me, you’re just back from driving fifteen hours round trip to pick up your kid from a college that is closed for “two weeks,” but really indefinitely, until this clusterfuck of a pandemic is over.

Our routines seem so solid, so established. We take for granted that they will remain constant, that the foundations of our lives are sound. It’s disorienting to realize how fragile these things truly are. Think about it: On New Year’s Eve, none of us had ever heard of Covid-19; most of us didn’t even know there was a collection of pathogens known as coronavirus. That was the day when health officials in Wuhan Province, China, first reported a cluster of mysterious pneumonia cases. The first case has since been dated back to November 17. But even that is only four months ago. And returning to December 31, most of us spent that night with friends and family, celebrating the New Year, unaware that THE dominant news story of 2020 was already underway.

Eleven weeks later, the world is a changed place. Hundreds of thousands ill, thousands dead. Who knows how high those numbers might climb? For many – too many – life will never be the same; for the rest of us, it will eventually return to normal, but the dislocations will be profound and unsettling.

Please allow me to pause here, and to be clear: None of what I am about to say is meant to in any way downplay the seriousness of the situation. For those most at risk – the immunocompromised, the older members of our communities, those who already have underlying medical issues – this is a matter of life and death. Others among us face huge economic hardships that most of us can’t even imagine. The most vulnerable among us – in physical terms AND economic terms – need our support, our love, our compassion, and the attention of our policy makers.

That said, placed in perspective, the disruptions the most fortunate among us – myself included – have endured thus far seem pretty minimal. We hope they will remain so. But in talking to my wife and my kids and other family members, in corresponding with friends and colleagues, I see already the toll taken by the sheer uncertainty of it all. That is another cost of the Trump Administration’s bungling response to the crisis. Yes, they have squandered precious time, and this WILL result in more sickness and, ultimately, more deaths. But even for those who will be fortunate enough to remain healthy, the cost in uncertainty and anxiety is significant.

I got really ticked off at myself the other day because I realized half the day was gone and I had accomplished nothing. I’m finding it hard to concentrate, to resist the temptation to check the news for the latest event to be called off or the next celebrity to announce that they Have It. And as I result I’m getting nothing done.

Which probably doesn’t matter right now. Do I really think publishers are immune to the economic dislocations impacting every other industry? Do I really expect them to be contracting new books or sticking to publication schedules for the ones already in production?

And this leads me to the next thought.

Have you read about the environmental impact of Covid-19? Economic activity has ground to a halt in China and Italy, among other places. And as a result carbon emissions are way, way down in those areas. Now, I am NOT celebrating this. We need to curb carbon output, but subjecting the world to a deadly pandemic is NOT the way to combat climate change.

My point is that many of us – even as we’re expected to “tele-work” (an inelegant phrase, by the way – surely we can do better) – are going to have time on our hands. We’re not going out as much. We’re probably not traveling. Professional conferences are on hold. We’re not going to movies or concerts or sporting events. We won’t be watching March Madness or the end of the professional basketball season or the opening of the Major League Baseball season.

So what will we be doing? 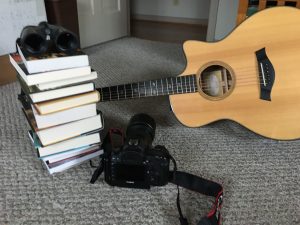 Last week, I went on a hike and took a bunch of photographs (if you haven’t already, check out last week’s Photo Friday post). I have a ton of books to read. Lately, I haven’t been playing my guitar nearly enough. It’s almost time for bird migration, which means more hikes. Yes, I’ll probably be watching TV and movies from home. All of us are going to be binging something, I’m sure. Yet, even the most dedicated bingers can’t spend ALL their time in front of the screen. Those of us who lament never having enough time to do all the stuff we’d like to… well, we finally have that time. It’s been imposed from without. It comes with anxiety-inducing social costs. But if ever there was a time to slow down and enjoy the simple things that modern life too often encourages us to ignore, this is it.

And that’s where I’ll leave you today. This is what I’m musing on this odd Monday. We are in a dark time, to be sure. I’m nervous, as I’m sure most of you are, about the economic and social and biological and political implications of the pandemic. There is plenty to fear. As with all things, though, there is also a flip side. I have thought for a long time that I would like to simplify elements of my life, but in my rush to be productive and to keep all of my professional and personal commitments, I have allowed that wish to fall by the wayside. Now, I have no choice in the matter. For good or for ill. As it were…

Wishing you a good week, whatever that means at this moment in history.

I am home from a great weekend at the Saga Professional Development Conference in Charlotte. Terrific people, great workshops and panels, and good humor all around when it came to dealing with the looming threat of the coronavirus. Containers of hand sanitizer were everywhere, including in the swag bags we were given at the start of the weekend. Handshakes and hugs – fixtures during most con weekends – were replaced with fist bumps, elbow bumps, and knowing, slightly nervous smiles. People wiped down everything in sight, hoping that would be enough to stave off a disease that we had no reason to believe was any threat to any of us in that particular place at this particular time.

To say that it was weird, is to vastly understate the matter.

But weirdest of all were the farewells at the end of the conference. “What’s next for you? Where will I see you next?” These are normally questions my friends/colleagues and I ask one another during such goodbyes. This time, our answers were tinged with an ominous uncertainty. We made light of the situation; there was lots of gallows humor.

The fact is, though, we know nothing. Clearly the financial markets expect this to get much, much worse. Major universities, from Stanford in California to Columbia in New York, are cancelling in-person classes and moving to online interactions. School systems are shutting down schools in Washington State and Westchester County, New York. In other countries – Italy, South Korea, Iran – where the outbreak is already far more advanced, remedial measures are even more severe. They could very well foretell our near future.

I’m not trying to be alarmist. These Monday posts are called “Musings” for a reason. This is where my mind is this morning. We are dealing with a situation that could go off the rails pretty quickly. And at the risk of veering into politics, I have to tell you that I have no confidence in our government’s ability to deal with. Or, to be more precise, I believe the CDC and other agencies could deal with it if we had a President who was capable of confronting the truth and allowing the experts to do their jobs. Unsurprisingly, he has shown through the early days of this crisis that he doesn’t have those arrows in his proverbial quiver. He can lie, he can blame others, he can deny and deflect and then double-down. He cannot lead.

I hope that his shortcomings won’t cost lives and won’t deepen the already-serious crisis before us. I’m not confident.